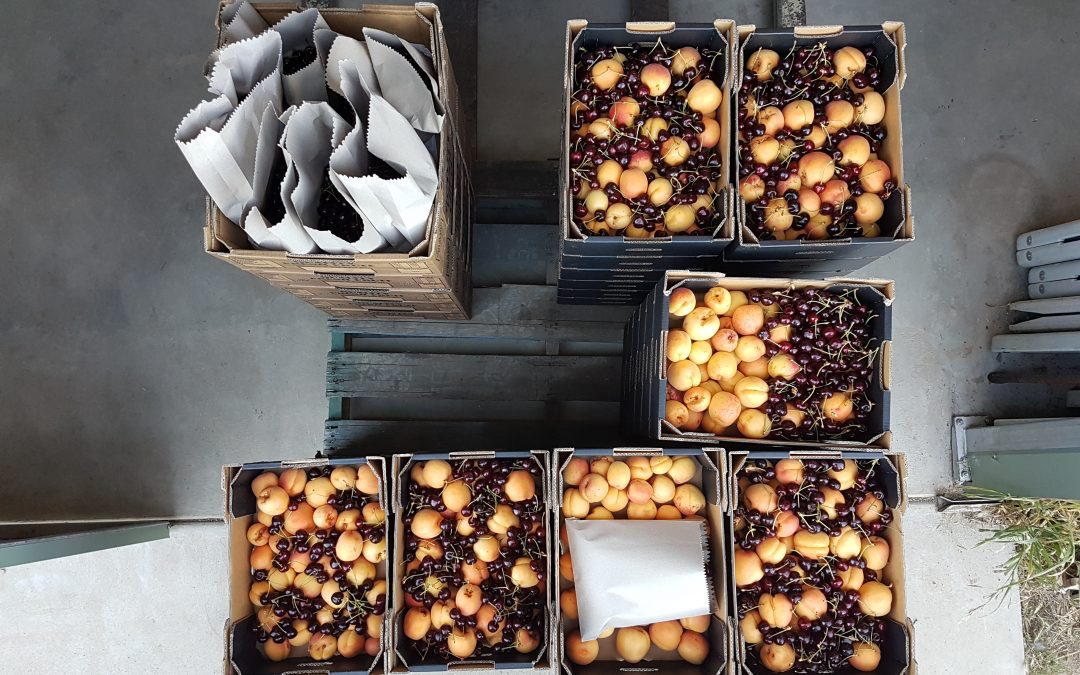 Here’s the results of our feedback survey for the 2019/20 fruit CSA. I had 70/100 members fill out the survey which is excellent! Of those respondents, 95% rated our CSA 4 or 5 out of 5 for ‘quality of produce’, ‘value for money’ and ‘communications’ – and that is even more excellent!

As far as comms goes, there was only a few minor hiccups. I had the timezone set incorrectly in my mail program which meant the emails explaining what was in each box were arriving later than I intended, although sometimes I was definitely late or missed them completely. I’m spread so thin during the fruit season that sometimes I just can’t do everything so comms (especially reading/sending emails) falls off the priority list in favour of harvesting/grading fruit etc.

I was using a web-based service to send out your reminder texts each week which is why my number comes up different all the time and why you can’t call me on that number. These two things combined mean that I can be hard to contact but my phone number is included in those weekly emails so feel free to call or text anytime – especially if it’s about a change to your delivery.

There were a few requests for more recipes/ideas to use excess fruit. It was my intention to build a resource to share with you last year but I didn’t get around to it. There is a private facebook group where I would love for anyone to share their recipes, stories, ideas or photos. I know some of you make incredible food and preserves with your fruit so if you’re into social media, share away! Alternatively, you could email them to me and I’ll post them on my website (if I get them before summer hits).

As for the fruit, a common thread in the feedback was that some fruit did not ripen. I have written about this before but succinctly encapsulating all of the variables is quite hard. I’ll do my best to summarise:

The timing between ripening and harvest is different for each variety (of which I have about 80). Each piece of fruit on a tree ripens independently. Ripening is a constant process that is never fixed, before or after harvest. Speed of ripening, before and after harvest, depends on environmental factors. All varieties handle differently when ripe (some well, some very poorly). Flavour and texture changes as fruit ripens and taste is subjective.

As you can see it’s a complex game. I appreciate the feedback and will continue to do my best to get the timing just right. Basically, the fruit willripen eventually. I understand that this may mean that you have a build-up of some varieties. All the better for preserving a big batch! Alternatively, less ripe fruit, depending on the variety, may be better for pickling or salting.

Another common remark was the abundance of plums. Some people enjoyed this and made sauces and upside-down cakes, and others struggled to get through them all. As my mentors Katie and Hugh would say, ‘plums are bomb-proof’. They are less susceptible to pests and disease which means they are more likely to provide a ‘glut’ than peaches – or apples as it were.

The best part about the plum-bundance was the amount of people reporting that they solved this ‘problem’ in creative ways. Freezing, drying, fermenting, jamming and bottling for the winter months or else sharing or bartering with friends and family. Hearing about those food-based community connections gives me the ‘warm and fuzzies’. It’s CSA and food sovereignty in action.

On the flip side was the lack of apples. Believe you me, I was just as disappointed. I thought I could protect them with more secure netting and sporadic patrols but it wasn’t effective enough. Next season I will try using my dog Maka to keep the roos away and if that fails I’ll build an impenetrable dome over the entire property.

As for the pricing structure both the open pricing and the barter/exchange models were again a success. The barter system is intended to diversify the ways people can pay according to their wealth (e.g. time, resources, skills, money etc). I accepted pork, lamb, bread, building supplies, home-made alcohol and massage as payment for fruit and I had some very helpful hands on the farm.

The open pricing model is intended to improve access for low income earners. The idea is that those who can afford to pay a little more can subsidise the cost for those who can’t. The ability to pay according to their situation is a benefit I can offer our CSA community in exchange for the commitment and support they show me.

About two thirds of the survey respondents are above the median household income while 30% are below. Most people paid the suggested price, while 25% paid more. This was just enough to subsidise the 5% who paid less and the average came out equal to the suggested price. So, I may not be capturing as many low income earners as I thought I might but even though it was in your hands, I achieved what I thought was a fair price.

Now for the good stuff. When asked what you enjoyed most, the answered varied from the convenience and excitement of regular deliveries that were already paid for, to the freshness and diversity of produce that is grown “with love”. Some enjoyed witnessing the seasonality as different varieties came and went. Others really liked having confidence in the provenance of their food and a connection to the farmer.

“The CSA-ness of it. I like being part of an environmentally and socially positive community/movement/organisation“.

What really made me smile was that almost everyone said they enjoyed directly supporting local, organic food systems. Community Supported Agriculture is a radically different model of connecting growers and eaters. It seeks to redefine long established industry, economic and community norms. So, it’s heartening to hear so many of you get a kick out participating in something that can create change. Together we are asserting our food sovereignty.

I do hope to host a farm tour/open day event before next season starts. At the time of writing, social restrictions have tightened again so I’ll just leave it open and hope for the best.