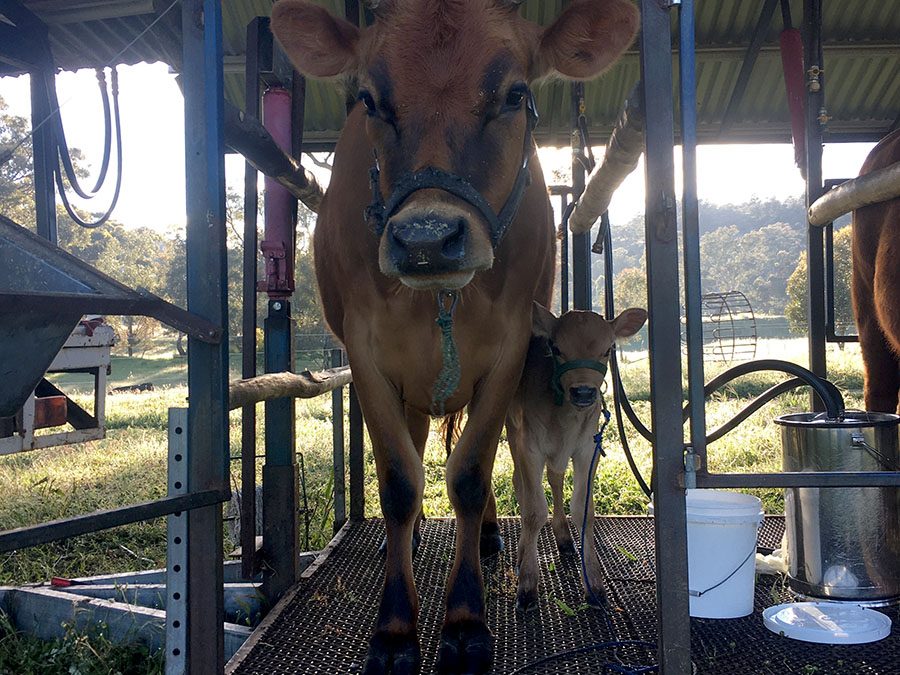 There’s a lot to consider when planning to have a steady milk flow all year round. Particularly when you are working with such a small herd, one cow can completely throw out your predictions. The coming couple of months are going to be very tights for milk supply at Sellar Farmhouse Creamery so I thought I’d take the opportunity to share some of the contributing factors which lead to this.

People often ask if I get more milk in the spring. When comparing seasons then yes you probably would get more milk for the input in spring, however there are many other factors which have a stronger influence; no. 1 being how recently she calved.

The standard milk graph for a cow would see her increase each week after calving, peak at around 3 months and then decrease as she is gets close to having her next calf. Most commercial dairies, breed every 12 months. This insures that all cows have a profitable milk supply and helps to maintain clean fresh milk with a low cell count.

When calving every 12 months it’s hard to know how long a cow would naturally milk through for as she never gets the chance. To begin with, all cows are individuals. Then we add several influencing factors which will determine her milk production and how long she will milk for. Breed, family genetics, age, health history, how stressful calving was, the season, how long she was dry in the lead up to calving, what she’s eating all play a role.

My previous experience was with goats, some of whom had kidded once in their 9 year milking life and were still huge producers. I’d also heard stories of other dairies and house cows who would milk through without calving on a yearly basis. I like the idea of this as I’m in the business of milk not meat so the fewer calves I have the more energy and feed I have for the milkers. I also know that the three months after calving puts a huge strain on the cow, many health problems occur in this vulnerable period and in my books, the fewer times she has to do this the better.

As I said though, each cow is an individual (don’t they like to remind you of this!) and until I’ve worked with them all through their first lactation I have no idea who will milk through and who wont. So it’s been a learning curve and trying to manage a steady milk flow has been difficult. For example Olive has been milking now for 15 months, still has the most beautiful clean milk, producing 11ltrs a day consistently for 10 months and I’m now having to force her to dry off as she’s due to calve on boxing day. She is definitely a cow that I don’t need to breed annually. However, Joyce on the other hand calved in Sept, went from 16ltrs a day in Feb to 6ltrs in May and down to 2 in July. As I only got her in calf again in April she certainly hasn’t been paying her way for a while. This may be her breed, or her as an individual or that this was her 6th lactation and previously she’d been bread every 12 months so maybe her body was use to it, who knows. But she will definitely need breeding every 12-14 months to stay in milk production. I learnt this the hard way.

Most cow’s reach their peak production at around five years old, or their third lactation, so having a diverse range of ages in my herd is very important. I’ve got Berta, Joyce and Ginger between their 5th and 8th lactation’s while the rest are still in their first. Currently Berta and Ginger are producing a third of my milk each. At the other end Quartz and Norma have both started off with small udders and low production. However they will increase in future lactation’s and as they have both been a dream to calve and train they are certainly welcome in my herd.

Then there is the calf-at-foot practice which I run. For the first 3 months, calves run with their dam. The first full week they spend together and then I begin to separate the calves at night in a pen attached to the parlour. This way mum can come a check in during the night, she can touch her calf but not feed it. In the morning I take 3/4 of the milk and leave one for the calf who then spends the day with thier mum. The time they spend apart gradually increases until one day the afternoon feed stops and they are weaned. So during this high production period I’m taking between 1/4-3/4 of the milk produced depending on the cow. I’ll leave the details of calf-at-foot dairying for a future blog but it’s worth mentioning here as it has a big impact on planning my milk production.

There is also feed at play, milk is directly a result of what the cow eats the 24hrs before hand. All milkers get a consistent feed ration at night and while milking however misjudging the quantity/quality of pasture in a paddock can impact the following days milk total by up to 15%.

These are some of the main factors I’m balancing up when trying to plan the year ahead to have a consistent milk supply. Cow’s are pregnant for 9 months so planning needs to happen a long time in advance. I aim to always have two calve at the same time so calves have a buddy, although sometimes cows (Iggy) have their own plans. This is why my sales structure is based on having 3/4 of my milk sold through CSA subscription and 1/4 through farmers market sales. The farmers market acts as a buffer, meaning that if something was to happen to a cow, or the season, then I can decrease the amount I sell, or increase if production is high, without it impacting my CSA sales.

Norma Jean calved 3 weeks ago with Doris Day. She is the first planned calving of a heifer I raised, it’s been really beautiful to watch it come full circle (Iggy broke in with the neighbours bull and had a teen pregnancy so that wasn’t my planning!). Norma has been such a super star milker, not a single kick or poo in the stall and coming in on her own after a week of leading in.

Next to calve is Olive on Boxing day so this is why my milk supply may drop over the next two months. Olive is a very good, consistent milker who I must dry her off now before she calves. Norma is not up for replacing her in milk quantity due to being smaller and having a calf-at-foot. Joyce is also dry now until Feb and Luna and Quartz only give me their two cents worth. The more I work with my herd and get to know them as individuals the better I will get at planning for a consistent supply. Then nature will remind me I cannot control her, throw chaos to the plan and the whole process will start again!