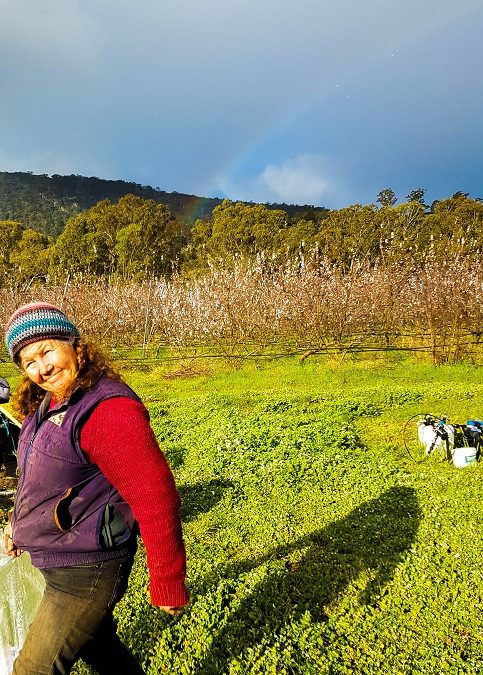 A new era in the nursery…

This is Liz, who you might have noticed in recent nursery shots on Grow Great Fruit’s Facebook or Instagram, along with me (Katie) and Merv (Pa). If you’re thinking she looks a lot like me you’d be right, she’s my older sister.

⁠⁠Well, we’d like to publicly welcome Liz to Carr’s Organic Fruit Tree Nursery. Since Sas sadly had to leave the nursery earlier this year (to give her back a chance to heal and allow her to focus on Gung Hoe), Lizzie’s been helping out a lot, and it seemed a natural step for her to join the business – now it really is a family affair! ⁠

You might think it’s quite an obvious thing for Liz to join the nursery, but in fact none of us predicted it, and it actually came about through a funny coincidence.

Of course Liz grew up here on the farm and like me, was pretty hands-on helping out as a kid. But (also like me) Liz had no thoughts of pursuing farming as a job, but instead has had a long career within the mental health sector as a consumer advocate—a world away from the farm.

Nearing retirement, Liz turned her attention to spending more time developing her small farm (also in Harcourt), and started a PDC (Permaculture Design Certificate) at Castlemaine Community House (along with Janet, another of our sisters). The PDC usually does a field trip here to the farm as part of the course, and so Lizzie and Janet did a tour of the farm, along with all the other PDC participants.

I was showing the group around the nursery that day. I thought it was going to be slightly weird, showing my sisters around the farm where they grew up, but it was great! Though they grew up here, the nursery is a new venture and so they didn’t know much about it, and were really interested in what we were doing.

It turned into one of those funny moments where you share something with someone you’re close to that they had no idea about. From my point of view, it was so lovely to show my sisters a part of my world that I wouldn’t normally talk much about with them, and for them to take such an interest in it. Merv was also quietly chuffed that they’d taken an interest in what he and I do in the nursery.

This all happened just before Sas let us know she’d be leaving the nursery. Pa and I were sad about Sas leaving, but had talked about it and decided we could easily manage the workload between the two of us. Then one day in the nursery after the PDC visit we were working away and Pa said “I’ve been thinking…”

Hmmm, I wondered what was coming…

“I wonder if Lizzie or Janet might be interested in joining the nursery? What do you think?”

Well duh – what a great idea! Once he’d said it, it seemed so obvious. Unfortunately Janet is also currently managing a bad back which ruled her out, but Lizzie jumped at the chance.

So, here we are. Having patiently taught and nurtured me and Sas through the ropes to a reasonable level of competence over the last few years, Pa now has another complete beginner on his hands. Back to grafting 101.

But Lizzie’s taking to it like a duck to water, and every week is learning more about rootstocks, seedlings, planning, varieties, and yes – this week she did her first ever grafts. You’d almost think she’d been born to it!