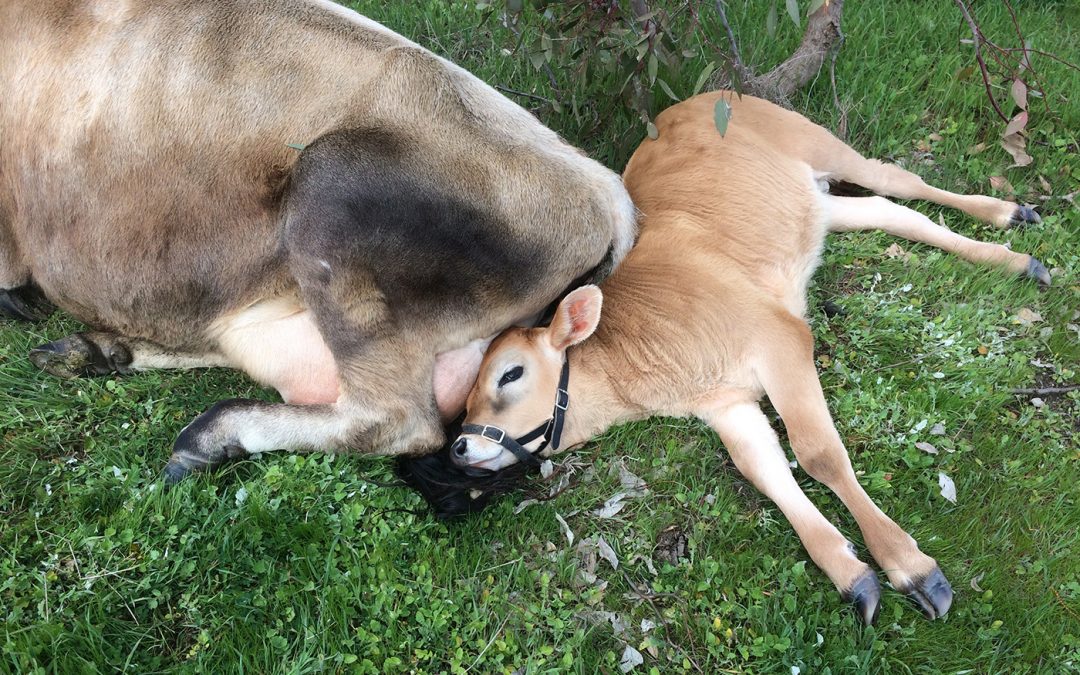 Here at Sellar Farmhouse Creamery we run a calf-at-foot practice where calves spend their first three months nursing from their dam.

We’re currently gearing up for four cows calving over the next three months so I thought this was as good a time as any to talk about the pros and cons to running our system.

The modern dairy cow produces far more milk than required to raise her calf so sharing that milk when done fairly isn’t detrimental to the calf. There are many factors to keep in mind when deciding how to raise dairy calves; whether practicing immediate removal, through to cows nursing until they next calve, every dairy farmer has a system which works best for their situation.

Raising healthy calves takes time however you choose to do it in a dairy system. Removing calves young means you then have to invest the time in bottle feeding them. Running calf at foot means you have to spend time training, separating and weaning cows and calves. If the calf has no need for humans to feed them, building a relationship of trust takes much longer.

This is a very complicated debate. At it’s core, I don’t think many would argue that calves allowed to nurse from their mothers grow up to be healthier more resilient animals. They also tend to be healthier calves as their dam will change her milk to the needs of her calf. If a calf gets scours the dam will lick it’s bottom, create the antibodies needed and pass them back to the calf in her milk, incredible. The overall protein structure of healthy milk, feed fresh, at body temperature is also the most digestible feed source for a young calf. To be cost effective, some dairy’s feed the mastitic milk to calves which then can lead to gut problems due to degraded protein structures and bacterial overload. So when breeding for future milkers, cows raised on their dam tend to be more resilient. In many ways a cow is little more than a rumen on legs, thus healthy gut = healthy cow.

There are risks though from raising calf-at-foot. If you’ve ever watched a calf feed you’ll know they are not gentle. Unlike the consistent, smooth milking cups, a calf can be very violent when feeding, often creating cuts, bruising, pulling and once the milks all out they will continue to suck until mum kicks them in the head and walks off. This increases the risk of a damaged udder which can lead to infections and mastitis. The flip side of this is that the best thing for an infected udder to be regularly milked out which the calf can help with.

Johne’s disease is another key reason for removing calves young. A chronic wasting disease caused by the bacterium Mycobacterium avium subsp. paratuberculosis. It invariably leads to the death of the animal. One of the key ways it is spread is through milk and thus an infected cow will infect her calf if left to nurse. Different states have different restrictions surrounding Johne’s disease and how serious it is taken. But for many dairy’s who test positive, removing calves is a obvious measure to eventually breed the disease out of their herd.

This is the ongoing ethical debate which is always problematic as we humans try to anthropomorphise animals. Some will argue it’s better to do it quickly at the start before a bond is formed as it’s more traumatic later on, others will argue that it’s cruel to remove a calf while it’s still nursing. I think probably all arguments have some merit. There is also the case that all animals are individuals and particularly in the breeds which have been breed specifically for dairy, many of the maternal instincts have been lost. Meaning that there are cows out there who don’t give a stuff about their calf, while others will destroy you if you try to come between them.

All I can talk to is the experience I’ve had which is that that first week after calving my cows are super hormone charged, then things settle down a bit. They are also highly vulnerable in those first couple of months and thus for me, the less stress I can put on the cow the better. My priority will always be the health of the cow, what she needs she gets. If her calf is far too violent and damaging her udder then I need to restrict the time they spend together, I learnt this the hard way with Berta.

The bond shared between cow and calf is a beauty to watch, even when reunited as adults it remains strong.

If raising calves separate to there mother you are either paying for milk powder or using the milk you’ve just milked out of the cows.

There are wages to calculate from having to prepare milk, feed calves and clean equipment, plus in my experience there are significant hours spent treating sick calves, mostly from scours. However with the calf-at-foot program, while I still have the hours of training, separating and weaning calves, I believe this comes in as less hours. There is beauty in reuniting dam and calf in the morning after milking and often tears (mine) in the evening as I chase calves around the paddock trying to catch them.

However the main reason people separate calves is that we are in the business of selling milk, not raising calves. So you’re aiming to raise a calf for less cost that you can get for it’s mothers milk. This may be by selling calves young and letting someone else pay to raise them, using lower quality milk which you wouldn’t sell anyway, buying cheaper milk powder, feeding less and in many set ups, culling the boys very early. If dairy calves where valued for meat as they should be then there would be far more incentive to raise them. The other factor is that if we moved back towards dual purpose breeds such as the Dairy Shorthorn then their bull calves would carry the same value as beef animal, thus the incentive to grow them out.

So what do we do?

At Sellar Farmhouse Creamery, calves live an average of 3 months with their mother depending on when the cow is ready to drop to once a day milking. Calves have the day and evening milk while I take the morning.

Our average process for weaning calves:

week 1 – stay with mother all the time

week 2-3 – Calves spend the night in a pen attached to the milking parlour, while they cannot put their heads through the fence to drink the cow can reach into the pen to groom and have contact with the calf. This allows her the ability to go out and graze, then return to check on the calf. After morning milking the calf is reunited with the cow who will have milk left for feeding her calf.

week 4-12 – Calves gradually spend longer on their own, in the pen to begin with and then separated by an electric wire. They begin to live independently to their mothers and visa versa. The aim is to always have two cows calving together so calves are never left on their own and have a buddy.

week 12 onwards – eventually the calves are only let back in with their dam for a quick evening drink and eventually this stops completely when the cow is considered good to be milked only once a day.

A fantastic resource for running calf-at-foot which helped me work through many of the obstacles is Smiling Tree farm in the UK.

Next up is Luna, due to calve on the 17th of May. She’s the only one from this batch I’m worried about, last time she went down with milk fever and due to bad udder odeama and low immune system she lost the use of one quarter. Thankfully she’s first so I’ll have time to really focus on preventative treatment and giving her lots of support.

Then we have Quartz in June. Both her and Luna were with a handsome white Dairy Shorthorn bull. The new lady Nancy is due any time from mid June and Iggy the tart who prefers the neighbours bull (not my choice!) is due mid July.

These calvings will increase my milking herd to 8 and allow me to finally open up some more CSA subscriptions. So if you’re on the waiting list keep an eye on your inbox (and often junk mail) over this period as you may get instructions for subscribing.

Lets hope for a smooth run!