A cuppa with Merv 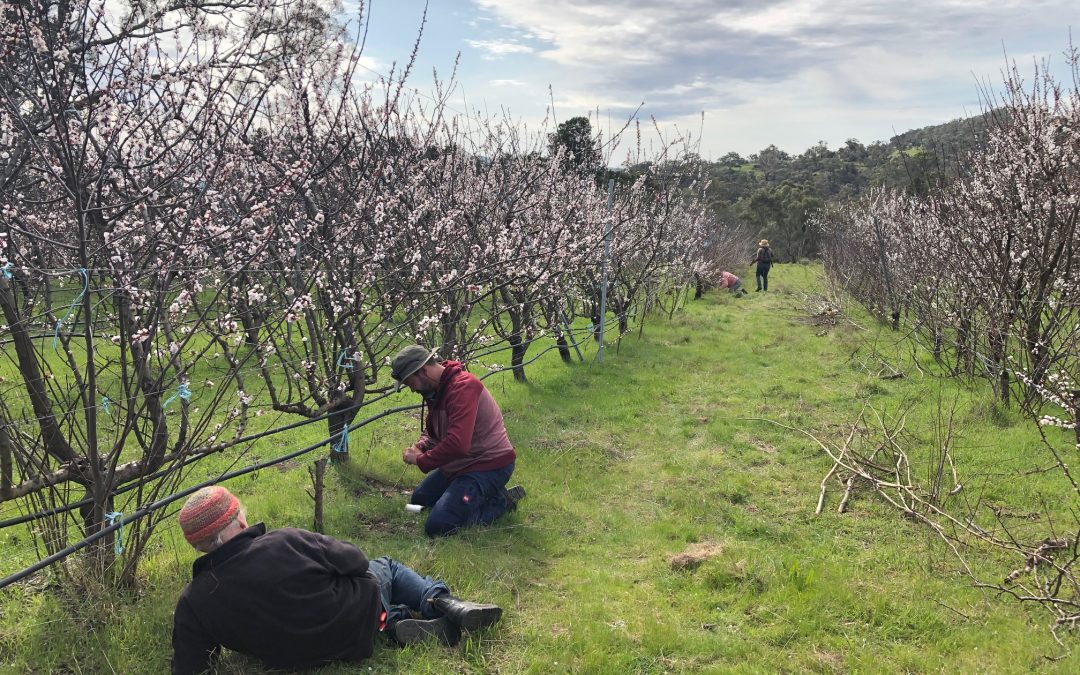 A cuppa with Merv

Orchard Keeper Ingrid sat down with Merv Carr to yarn about his background in orchard keeping…..

Taking on this orchard lease, a second-generation orchard of 4000 trees sitting at the foot of the powerful Leanganook on Dja Dja Wurrung Country, is a humbling experience. It is also a unique experience, as far as we know, the arrangement of leasing an established orchard while being trained up in how to manage it by its former managers may be the first of its type in Australia. To begin to establish our own connection to and understanding of this place, we are keen to learn some of the stories that this land keeps. Taking the opportunity to sit down for a cuppa and a chat with Merv Carr seemed like a good starting point.

Merv Carr bought this orchard in 1971 and today the farm is owned by Merv’s daughter Katie and her partner Hugh. Merv explained that it was actually his father who was the first in the Carr family to have a connection with the property. Back in the 1920’s, when Merv’s father was 15, he would ride his bike up the hill to work here. At that time, it was operating as a pear orchard and supporting a small herd of dairy cattle.

Hearing Merv talk of his experiences in the industry, it is easy to see why this orchard is still in operation. His innovation, dedication to the profession and ability to adapt with changing times has held this property in good stead. There is resilience here.

Merv was born in Harcourt in the 1930’s, where he lived on the family orchard on Blackjack Road, just around the corner, alongside the then Calder Highway. When Merv and his older brother Howard were kids, Howard took an interest in the increase in passing traffic on the weekend of the Bendigo Easter Fair. Howard had an idea and shared it with Merv. The two of them would pick up windfall apples from their father’s orchard and stand on the side of the road, selling them to passers-by. The two enterprising boys made enough pocket money selling the windfall apples to get them through the whole year. This eye for an opportunity would ultimately lead Howard to opening one of the first roadside stalls. Merv recalls his brother saying, “There’s a market driving right past our door!” Merv describes it as a cunning move and applauds his brother for having the knack to spot a market and make money.  Howard’s idea was to set the scene for others who followed and from that time onward, many more roadside stalls popped up in the area. Selling locally and direct to passing customers provided a good income at the time.

Merv decided from early on that he was going to become a professional orchardist. Encouraged by his orchardist father, Merv completed a Diploma in Horticulture at Burnley Horticulture College. A young bloke, he planned to be in Melbourne for two years but stayed for a third where, under a scholarship, he refined his orchardist skills on a horticulture research farm in Scoresby. With these newly acquired skills under his belt, he returned to Harcourt Valley, and the family orchard.

Many years later, Merv began the search for his own orchard when he found and purchased this place. 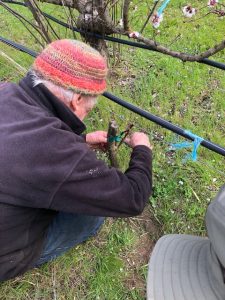 An expert grafter, Merv has used his grafting skills to recreate the orchard on this property two times over. Merv recalls a time when everyone was planting small hard green apples that were suited to surviving long boat trips to London. The orchards of the Harcourt Valley were originally planted out with these types of exports in mind.  Unfortunately the early optimism for this approach faded, there was not much money to be made on these exports and to make matters worse, the fruit couldn’t be sold locally. Backed by his experience and the skills gained down in Melbourne, Merv made the call to stop and change direction as fast as possible.

Undaunted, he started grafting and experimenting with new varieties. This fresh approach opened up some exciting opportunities to become more competitive and ultimately to bring in a greater income. The city of Melbourne was taken care of by orchards in Box Hill and Ringwood but Sydney and Brisbane were in the market for the fruit from Harcourt Valley. So ready, in fact, that there was a platform at the Harcourt train station where 3 to 4 carriages of fruit were loaded every Tuesday, headed for Brisbane. The Carr family seems to have a knack for understanding and engaging with the right market at the right time.

Merv describes the community of orchardists in the early days as a supportive group. There were a number of co-operatives in operation at that time. This business model helped reduce running costs and enabled them collectively,  to share some of the heavy labour load. Most farmers stored fruit in the Co-operative cool store sheds; equipment, chemicals and engineering gear could be purchased from the Commercial Co-op down the road and there were two sawmill Co-ops too. Merv in fact says that Harcourt was built on Co-ops. He was on the board of the Coolstores Co-op and invested in the orcharding community.  The industry was thriving and Merv recalls there was always someone to take your produce to Melbourne or it could otherwise easily be sent on the weekly truck or train.

The orchard industry was a huge source of local employment in the Harcourt Valley. Merv was able to supplement his income by working on one of the larger and expanding orchards, Thompson’s Orchard. Both the Coolstores Co-op and the Commercial Co-op also employed large numbers of staff, as did the sawmill industry. It was a surprise to hear Merv talk about the local pine plantations in Harcourt, that we still see today, that were initially planted for the orchard industry. Bushells and cases, the fruit containers of the time, were made from local pine with hammers, nails and sweat. Thousands of cases were used to transport fruit locally and overseas.

The one certainty of agriculture is its ups and downs. As time went by, it became harder to remain competitive and the industry changed completely.  Small acreage farms in the valley were bought out by larger businesses and  farmers had to walk away. Supermarkets were able to buy in bulk and they pushed down prices.  I asked Merv why he thinks that the farms dwindled out. He attributes it to the fact that it was hard work and not a popular vocation for the next generation.  “Farms in that previous form, in that state couldn’t  operate and couldn’t be competitive. Where do you sell? Where were you going to market that?”

The development of a more commercial apple industry in Harcourt did lead to some positive changes, with an upgrade to the irrigation system for the region from earthen channels to pipes, making more water available to all farmers by reducing wastage.

Merv explains that, the smaller orchards that have survived are those that have established new associated enterprises. One of the examples he gives is  the return of his daughter, Katie, to the family farm. Katie and Hugh bought the property from Merv and, innovating in the same way her father had done before her, made the shift to organics. There was a market for organics and he was supportive and happy for them to make that change. It seems Merv has always recognised when there is a need to change and has been able to adapt.

The property has been an organic orchard under Katie and Hugh’s stewardship for 23 years now and has over 100 different varieties of fruit including apples and pears and a wide range of stone fruit. This diversity of varieties is yet another reason this orchard has been resilient over the years: when one variety has a poor year due to pests or disease or weather conditions, it is likely that other varieties won’t be affected to the same degree.

Katie and Hugh have transitioned their role on the orchard by leasing it out as a member of the Harcourt Organic Farming Co-op – first to Ant Wilson who ran the orchard as Tellurian Fruit Gardens, and now to us, The Orchard Keepers. Katie and Hugh are playing  a vital role as mentors for us, the new recruits. Merv is also still involved with the farm today, running Carr’s Organic Fruit Tree Nursery with Katie and Liz, two of his four daughters, as well as teaching us about grafting and keeping a keen eye on things. It’s amazing to think that Merv has used his grafting skills to recreate the orchard on this property two times over and now we continue that art under his watchful guidance!