The circle of life 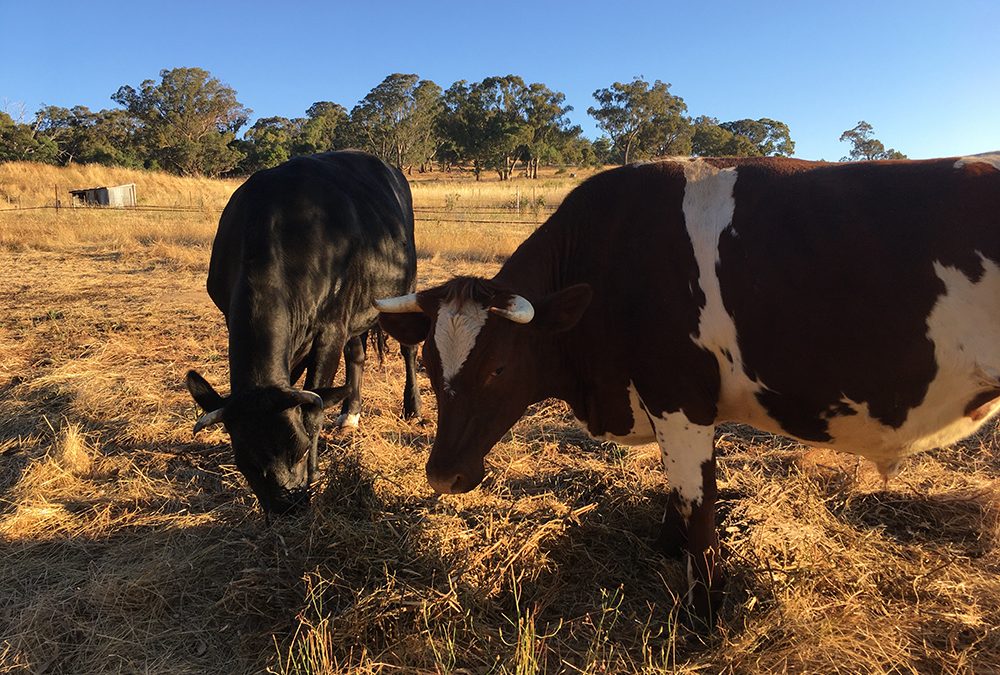 This is my  reflection on the life and death of our two beautiful steers, Otis and Rupert.  This is possibly the most controversial part of dairy, the part many would prefer didn’t exist and in fact something which many would not even consider. Our first on-farm kill, which has taken up multiple days over the past two months, may be quite confronting.  Many may prefer to not think about the death that is involved in dairy at all. However anywhere you have life, you also have death and I think it is incredibly important to be transparent about this. Many of the problems with our food system are due to the disconnect between what the consumer wants to think about and the actions which farmers must take in the current market.

Do not fear though. This post is not all doom and gloom; in fact for me this has been quite a positive process and one I want to share. I also own that it is a story told from my human perspective.

Rupert was born September 7, 2019 in the middle of a gorse patch for maximum protection – a spectacular Illawara dairy shorthorn, son of Joyce. I was always pretty sad that Rupert was a boy as he was the only chance I’d have for a pure Illawara born on-farm and he had the most spectacular coat.

Otis was born to Berta on February 20, 2020. Once a boof head, always a boof head. He was always my most advanced animal in the art of escape.

Both of these boys were an absolute pleasure to work with, very gentle in nature (exaggerated by their lack of testicles!) and grew into very handsome boys. From the moment they were born and I checked between their legs, their future was determined. I’m sure this played a big part in the psychology of my relationship with them both in life and death, this didn’t however have the slightest impact on the respect, love and pats I gave them.

When the time came, we had two choices: to send them off to the abattoir and sell the meat, or to kill/butcher on-farm having never experienced a moment of stress, and we share the meat among family. (All meat in Victoria must go via the abattoir if it is to be sold.) We chose the latter. And I’m so glad we did.

Fortunately Oli is an experienced hunter so I could feel confident in our ability to get it right, first time. Now I’m really wary of romanticising this but Otis and Rupert literally died standing calmly next to us, apricot in mouth. I’d be pretty happy if that’s how I go.

I was vegetarian for 15 years, I now only eat meat from an animal that I’ve had some connection to in it’s life.  I need to feel comfortable with the whole story of the meat on my plate. I had only been at the goat farm for a week when I had an epiphany. Sitting in the shed with an old goat while she died, something changed in my thinking:  it’s not about the death, it’s about the life. It’s about every moment up until that last breath. What was the quality of life? Were you treated with respect? These are the things to fight for. So that’s where I sit now, running a livestock business where yes, my boys will die sooner than most of my girls, but I will do my best to make their lives equally valued.

I always find the moment of death shocking as I’m sure most people do. Until I have touched the body and know it is now just flesh, even killing a mouse makes me uncomfortable. To come to understand the magic of life is an incredible experience.  One moment there is this creature, living, breathing, growing, feeling, thinking, and then the next…nothing, flesh. Holding an organ which is now just meat,  I cannot comprehend all that it was once capable of. To me this is magic. Nature is truly incredible. So strong and resilient yet so vulnerable.

To see the anatomy of a creature also helps me connect more to my own body. While my body ages and my knees have become weak I now have a greater understanding of how they move and the combination of layers of muscle that support them.

Yet, all this wouldn’t have been enough for me to do that again.  We’re not huge meat eaters, so I don’t think I could have justified the death and work which followed if it were just as a source of protein for Oli and me. These large animals are not for a household but for a community. We had a team of four on the kill days, Katie, Hugh, Oli and me (although I ended up supervising after a mishap with a knife). Even with four, the size of the animals was back breaking, so much meat, SO much fat!

We hung them for four weeks which was followed by two butchering days. I’m not sure what we would have done if it hadn’t been for the help of Matt whose past life involved butchering. We were joined by Fi who also came with experience and sharp knives as well as Ella. Gathered around a long bench the conversation flowed, the steaks were cut and bagged, mincer grinding and a lunch of kings. Then I got to share it with people I love. This was special.

We took the hides down to the Ballarat tannery and are awaiting their completion. I could write a whole post on this wonderland. The last tannery in the country doing private hides. Seventh generation. Katie and I now scheming to find someone to start a tannery on farm.

So, while the whole journey was an experience of great power, I’m glad it won’t come around for another couple of years.

Thank you and good bye Rupert and Otis.