Reflections and a New Era for the Dirty Hoes 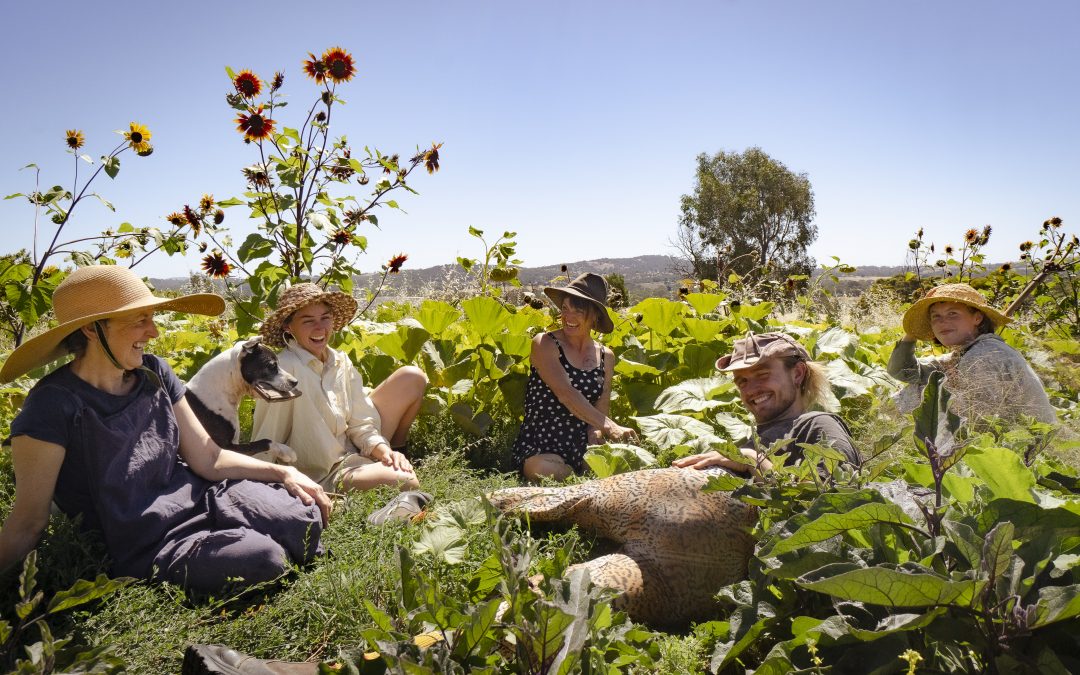 Well, Gung Hoe Growers a month back planted their 8th garlic in the ground. Those of you who have been journeying with us for any amount of time will have heard us say this is the crop that tells us the time.  Garlic was the first crop that Sas and I planted back in 2015 and what saw the beginning of us as Gung Hoe.  This year the garlic was big, beautiful, robust and a testament to our saving the best bulbs each year, for seven years.  The only thing missing was Sas.  Garlic has always been a symbolic crop for both of us, and so with the absence of Sas it was even more so.  As I’m sure you’re aware Sas has parted ways with us at Harcourt to continue her own journey and so this year garlic has for me (Mel) meant the moment to finally take a breath and the opportunity to reflect on the last 7, going on 8 years, as well put a marker in the ground for the next era which Gung Hoe is stepping into.

The carefully planned transition that Sas and I had been working on for her departure of Gung Hoe was cut short late last year and saw both Sas and Sky (one of our dear interns and hard winter worker) leaving ahead of our schedule.  (How parallel to farming – you have a plan that rarely goes exactly to plan)  Our team of 4 halved to a team of 2 unexpectedly over a month and thus Claudia and I were left spinning at the helm.  Fast track five months and we find ourselves here, at the gateway to the next season and era.

As with any change it takes me a fair while to process – I’m probably even what you’d call a delayed processor; so after a whirlwind of a time (and its still going don’t you worry!) I’m beginning to find the words.  There was a tangible Sas sized gap as well as grief, anger and sadness that all well into the same place when one has to find their feet again after a big unexpected change and someone is no longer present.

So I look to what garlic has taught me about itself over the years and I can align some of those teachings familiar to sas, too.  Garlic is consistent and steady. It is ready to plant at the same time, each year.  It is ready to be pulled at roughly the same time each year too.  It likes space to grow in its own time, without being hampered by weeds and other things competing for space, vying for attention.  It likes a enough water, rich soil and a decent blanket of mulch – to keep the earths warmth close by as the nights get cool, the sun has less hours in the sky and further on to keep it hydrated during the summers heat. It doesn’t like to be stark plain naked, it appreciates the cover which decomposes over time, until it’s ready to shine.  Garlic does its time in the dark, but then it needs to be cured properly, out in the open air – not kept wet or stagnant, otherwise it rots. Once its cured however, it doesn’t like too much glory; it will go back into a dark, aired corner and from afar will stay by your side, in your kitchen making every meal that bit better.

This photo was taken by Tess in 2015, Late spring I reckon. Sas and I proud kids after our first restaurant delivery to Alex Perry, of The Good Table (now Bar Midland).  The values which we held then still guide Gung Hoe.  We wanted to provide our community with fresh, healthy food.  We wanted people on a wage like ours to have access to good food grown locally.  I love this photo.  It reminds me of just how much has happened on our journey with each other and with Gung Hoe.

Gung Hoe exists because of Sas and I. Of who we each are and of what we brought to our partnership and to ‘the patch’. Sas said previously in a post that we’ve never done it alone, and she’s bang on.  The ride we’ve been on has had so many friends and community along the way.  People have believed in us and what we were doing  more than we have ourselves.  Gung Hoe will always have Sas in its footprints, how can it not. Her legacy will continue in the garlic we saved together for 7 years, the corn flowers that pop up here, the clover that sprouts there and the cosmos that wave in the wind over there. In the tomatoes that she first saved their seed and the elderberries that she brought from her home garden, planted and created habitat for so many beings in the plot ’wedgie’.  Sas is part of the fabric of Gung Hoe.

What garlic also teaches me is cycles.  There’s meant to be a seven year thing right? Well, our eighth garlic as well as saying farewell to a time, is also the door to a new era.  We’re still figuring out what that looks like, but we’re here and we’re ready.  Its been a big time of transition, and its not over yet.  Going from two business owners with two interns and a weedist, to one business owner, an intern, a weedist, a supportive bookkeeper, a Mike and two employees takes time, structure and money.

Claudia has been an incredible steady side kick, support plus an avid and capable learner – I trust her wholeheartedly, appreciate her clarity, instigation of deeper ritual, humour, good jeans and porridge. I could not have walked through this time without her working alongside me.

Deb – a weedist at heart she practices weedology; a dirty and often muddy religion, not for those who like clean fingernails and abhor getting into the dirt and gritty things of life.  Sharing with her cups of tea involve honesty, tears, laughter, velvet pants and poetry. She bottles up sunshine to remind you that it shone when your heart feels grey.

Erin approached the co-op a year ago saying if ‘they could teach her to prune she’d love to help out with the books’…a year later and she’s working with the co-op and Gung Hoe; helping Mel to understand, appreciate and get into the work of numbers all whilst supporting the whole team of Gung Hoe and Mel through the business transition.  We get to feed her every week too 🙂

Mike is one of the unseen support crew who knows and sees immense value in the people and vision of Gung Hoe; he both unendingly supports and puts up with Mel, ha!

Will joined our volunteer team during covid times a few years ago and has a curiosity that I hope never fades.  Seeing him grow with enthusiasm and inspiration around all things growing food is exciting to say the least. I very much admire his way of connecting and being in the world – its rare! and I cherish our conversations.

Pip is a gift from the universe (and dare I say her whole house!) who plopped on our front step at the perfect time.  Pip came to the weekly markets a few months back and a week later she was on board picking, packing and helping us to get shit done.  Pip quietly does quality work.  She’s clear and calm and kind with a killer laugh.  As soon as we met my gut said ‘you gotta get her on board’ – so glad I listened, Pip completes us!

Finally, but definitely not lastly we have a lovely crew of peeps who also come out on Thursdays – heads up to Thea, Zoe, Fiora and Mads – we love Thursdays working with youuuuu! And don’t forget Ronnie and Ben who come out most Fridays to do some work and be on farm with us!

As well as our immediate family; we also operate within the larger picture of where we farm, the Harcourt Organic Farming Co-op. Which is made up of: Sellar Farmhouse Creamery (Tessa, Oli, Fi, Mel and Bridget), the Orchard Keepers (Yoann, Ingrid and Alex), Murnong Mamas Bush Foods (Ira, Melinda, Joey and Aiden), Carrs Nursery (Katie, Merv, Lizzie) and Katie and Hugh not to mention the array of dogs, good food, little humans and friends of friends of friends. It is such a gift to not work in the fields alone.

And of course the wider family who don’t work on the farm with us! People who know us and see us and support us and who eat our veg – who we cannot ever go a week without! And its blinging produce; it gives us great joy seeing people being nourished by the plants we tend.

As we head into Autumn and Winter and things quieten down there is more space for reflection and learnings from the past, there’s room for dreams and visions to take sprout.  I’m looking forward to continue this years garlic by fully stepping into what’s next.  I feel very honoured to walk alongside these folk and have much hope for the unknown.

There is happiness in knowing that Gung Hoe is evolving into another chapter of growing fresh, healthy food for our community as well as growing us too.  May we stand solidly on the earth as we look to Leanganook during morning stretches and breaths; may we listen to ourselves, each other and the gifts that surround us each day and may we rise to create what our hearts know is really living in a balanced, full, generous way with integrity, humility and joy.

Every year
the lilies
are so perfect
I can hardly believe

their lapped light crowding
the black,
mid-summer ponds.
Nobody could count all of them —

only so many, they are that
rife and wild.
But what in this world
is perfect?

half nibbled away —
and that one is a slumped purse
full of its own
unstoppable decay.

Still, what I want in my life
is to be willing
to be dazzled —
to cast aside the weight of facts

and maybe even
to float a little
above this difficult world.
I want to believe I am looking

into the white fire of a great mystery.
I want to believe that the imperfections are nothing —
that the light is everything — that it is more than the sum
of each flawed blossom rising and fading. And I do.