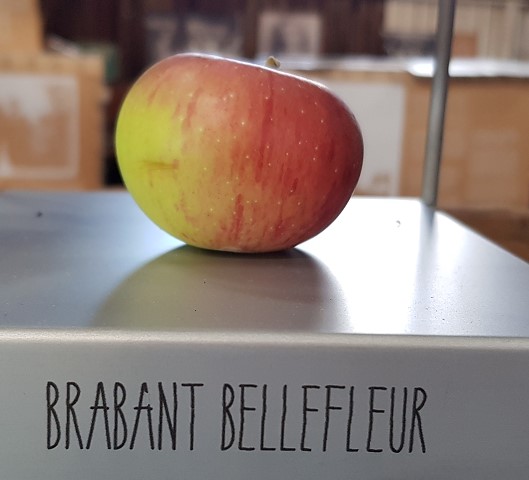 How many apple varieties can you name? If you’re an Orchard Keepers customer you’re probably way better educated than the general public, but most people would be pushing it to name more than 5 or 6. (And honestly, a lot of people only know that they like ‘red apples’ or ‘green apples’).

That’s one of the reasons why this year we’re asking you to plant a tree you’ve never heard of.

Imagine having a Brabrant Bellefleur, Beauty of Bath, or Belle de Boskoop in your garden. They’re worth planting for the names alone, but they also grow really delicious apples.

Carr’s Organic Fruit Tree Nursery is building a collection of heritage and hard-to-find fruit tree varieties here on the farm. This year we have almost 40 different varieties of apple trees for sale.

That’s still only a fraction of known varieties. There are literally hundreds (if not thousands) of different apples in the world, but most of them are unknown.

They need to be grown in people’s backyards, eaten, shared, talked about, and loved. In this blog, we’d like to introduce you to a couple of them so you can get to know them again.

The story of the beautiful flowers

One of the oldest apples in our collection is the Brabrant Bellefleur, named for its beautiful flowers. It was bred in the late 1700s in Flanders and was so highly regarded as a cooking apple that it passed from gardener to gardener over the next hundred or so years. Its quality was recognised when it won an Award of Merit from the Royal Horticultural Society in 1901.

The apples have been described as ‘knobby’, but they’re quite lovely to look at, with red stripes over a yellow background. It’s a firm, sweet apple with an aromatic flavour that ripens really late in the season in May. In fact, it’s one of the latest known apples to ripen. It also keeps well for months after it’s picked.

It can be eaten as a dessert apple, but it really comes into its own as a cooking apple. One of the most unusual recipes we’ve heard of is a traditional Dutch dish called hete bliksem (it translates to “hot lightning”) which is mashed potatoes and apples together! How good does that sound?

Sadly, Brabrant Bellefleur disappeared from commercial production in Europe by the 1940s, and now only exists in private collections. It’s on the verge of being lost altogether unless we can get it into people’s backyards.

An amazing thing you might not realise is that if you grow a variety like the Brabrant Bellefleur, you can literally eat a piece of history.

Because heritage varieties are passed down the generations by grafting, the apples you can grow today from one of these trees are genetically identical to the fruit that King Louis XVI of France or King George III of England might have eaten in their apple pies.

You can literally become part of a continuous chain of gastronomic history stretching back hundreds of years.

Another of our favourite apples is the Peasgood’s Nonsuch. The story goes that in 1860, I6-year-old Emma Manby from Lincolnshire in England planted 5 apple seeds, but only one of them grew. She nurtured the tree, and in 1865, she married Mr. Peasgood and moved to Stamford, taking the tree with her, even though it still hadn’t borne any fruit.

Mrs. Peasgood must have known something when she protected her beloved tree and took it with her into married life, because she was on a winner. They are thought to be one of the largest apples (fruit, not tree) in production – one of the largest individual apples recorded was a whopping 964g.

The apples won first prize in an 1872 Agricultural fair, and from then on Laxton’s Nursery grew and marketed it, up until the 1940s. Like so many heritage varieties, it fell out of favour, and these days most people haven’t heard of it, but wouldn’t you just love to be part of the Peasgood’s Nonsuch revival?

Harcourt is one of the oldest apple-growing districts of Victoria, as our nursery elder Merv talks about in this blog. Apple trees were first planted to feed the goldfield in 1857.

In its heyday, Harcourt had well over 100 orchardists. We exported apples all around the world. Even though there are less than 10 orchards left, we still grow more than 40% of Victoria’s apples.

We reckon that means that this is the perfect place to initiate a heritage apple revival!

In terms of varieties, Harcourt has suffered the same fate as fruit growing around the world. Only about 10 varieties are grown in commercial quantities.

In the nursery, we’ve slowly been tracking down as many old varieties as possible and adding them to our collection. But keeping them in a collection isn’t enough – that’s like keeping them in a museum. If we don’t all grow these varieties, they’ll disappear. To guarantee their future, they need to be planted in people’s backyards!